All About Tablespaces in PostgreSQL

How to use and manage tablespaces in Postgres.

Tablespaces is a simple, useful and arguably under-appreciated feature of PostgreSQL. They allow DBAs to accomodate growing databases, tables with data different from others, indexes that need to be super fast and so on. Read on to learn more about how to you can use tablespaces in Postgres.

What is a Tablespace?

Let’s start by initialising a PostgreSQL data directory. Here’s how to do that:

This creates a directory, named “data”, that contains everything needed to start a PostgreSQL server. The contents of this directory look like this:

This is self-contained, including the configuration files. All the data for all the databases, as well as items like WAL files, notification queues and so on live in this directory. Needless to say, these files must be managed only via the PostgreSQL server. This directory is, or rather can be used as, the famous $PGDATA.

To bring up a server to serve off this directory, you can:

Tablespaces are, in short, the way to tell the Postgres server where to place the physical files for SQL objects.

Tablespaces do not affect the logical SQL namespaces that the objects live in (like databases, schema, table, index) that the application developer sees. You cannot, for example, have 2 tables with the same name in the same schema just because they are in different tablespaces.

psql has a “\db+” command which lists tablespace in detail. Let’s have a look:

This says there are two tablespaces, owned by the user who did the initdb. But why two? Let’s refer to the fine manual:

The location of the default tablespaces is the same as the data directory, or $PGDATA.

Basically then, by default the server is going to place objects into the pg_default tablespace, which maps to the data directory itself.

Let’s try creating a new tablespace and see what happens – but first, we need to create a directory somewhere in the filesystem:

We now have a new tablespace, of 0 size. Internally, within $PGDATA, Postgres stores this as a symlink:

Most “CREATE” SQL commands come with a “TABLESPACE” option using which you can specify the tablespace in which to create that SQL object. Let’s try a few:

You can also move existing objects, from existing databases into a different tablespace. Here’s how we can move one of our tables into another tablespace:

You can also move all tables (or indexes) in one tablespace into another:

Affected tables are locked while being relocated.

A common use for tablespaces is to move indexes or tables onto a faster filesystem, for example, a new fast NVMe SSD or a EBS volume with higher IOPS. Informing the PostgreSQL query planner about how fast your new tablespace is lets it do a better job at estimating query execution times.

while leaving these values at “1.0” (the default) for the “regular” tablespace. For more information, see the documentation of seq_page_cost and random_page_cost.

There is also one more option, effective_io_concurrency, which can speed up bitmap heap scans if set.

Temporary tables and indexes are created by PostgreSQL either when explicitly asked to (“CREATE TEMP TABLE..”) or when it needs to hold large datasets temporarily for completing a query.

Use the option temp_tablespaces to tell Postgres which tablespace to use for creating temporary tables.

You can make clients create objects in a specific tablespace by default. This can be set as an option in a connection string or a client startup script, so that all newly created objects go into a new tablespace.

default_tablespace is the option you want to use for this.

Using pg_basebackup to back up a PostgreSQL cluster that has multiple tablespaces needs a couple of extra steps.

If you’re using tarball-format backup, each tablespace comes out as it’s own tarball (with the tablespace OID as the filename). While restoring, this must be restored to the same path (like “/tmp/space2”) that used to be present while restoring. This is probably a bit of a pain because the backup script needs to store this additional information also somewhere alongside the backup.

Here’s how the tarball backup happens:

Setting up a new standby for a primary that already has tablespaces involves bringing over the main data directory and each tablespace directories over to the standby. If you’re using pg_basebackup to do this, then use the plain format backup to also specify appropriate new locations for the tablespaces on the standby.

Creating a tablespace on the primary of a replicated server is bit tricker, because the paths for the new tablespace go over unmodified to the standby. The standby server expects an existing directory at the same location as in the primary, and creates a tablespace at that location. Typically, you’d want to:

It is not possible to alter the location of a tablespace directly – you can’t for example, change “/tmp/space2” to “/mnt/space2” through any command. However, it is possible to:

What all can you use tablespaces for? Here are some issues that can be overcome with tablespaces:

Among other things, pgDash can display your tablespace metrics and their changes over time: 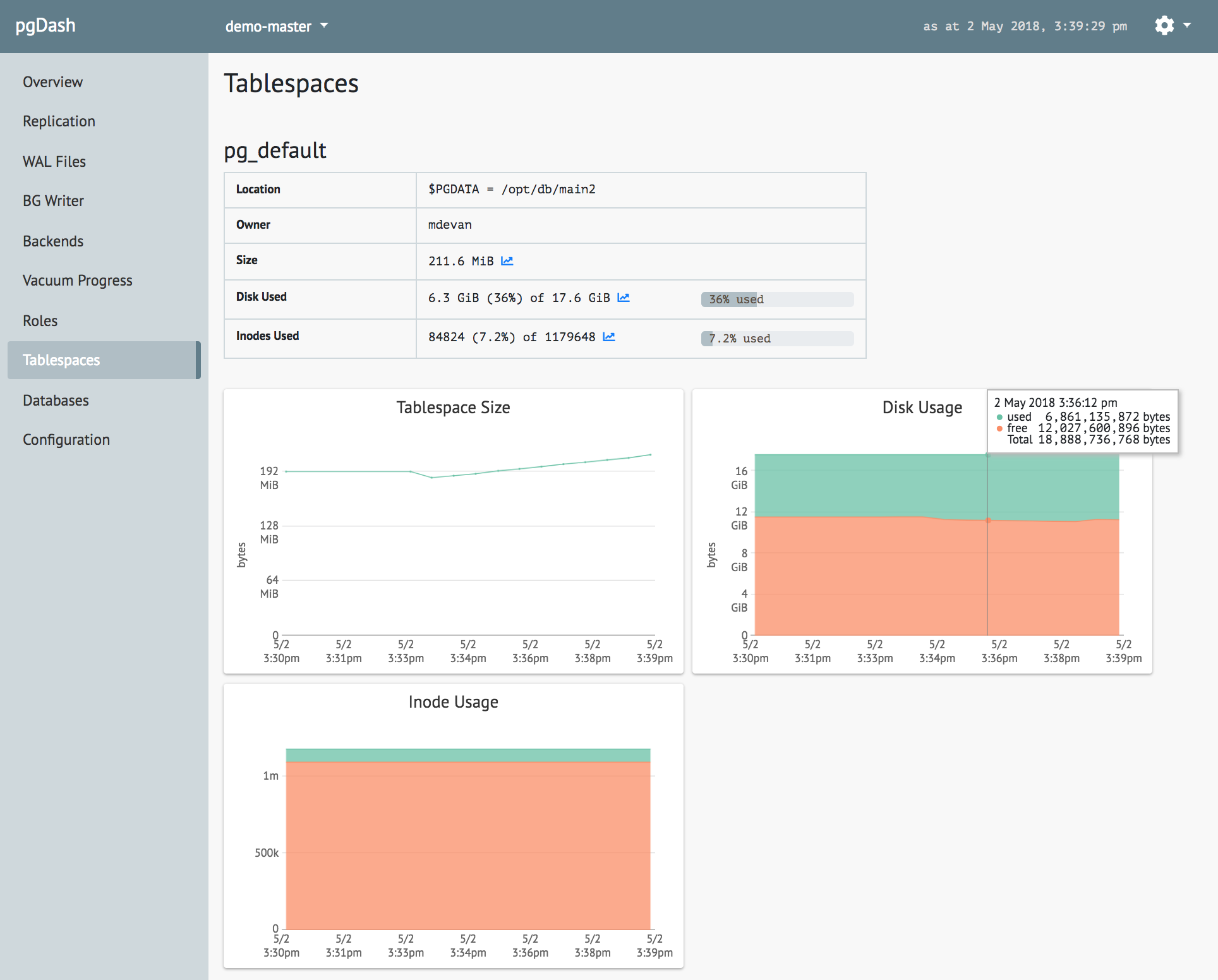